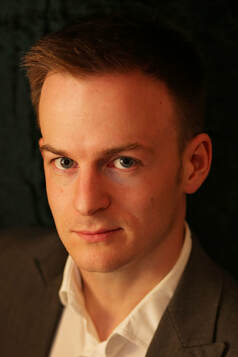 Christopher Pelly is a conductor, trumpeter, pianist and singer. He also plays the organ, tuba and various percussion instruments when the occasion permits. He has even been known to play the bass trumpet.

Christopher is the artistic director of the Leeds Haydn Players, the musical director of Otley Chamber Orchestra and a frequent guest conductor for West Yorkshire Symphony Orchestra. He has conducted symphonic repertoire by composers such as Haydn, Mozart, Beethoven, Brahms, Mendelssohn, Schubert, Schumann, Wagner and others. With Northern Opera Group Christopher has conducted productions of Alfred (Thomas Arne), Cendrillon (Pauline Viardot) and Much Ado About Nothing (Stanford). He has conducted Haydn’s Missa in tempore Belli (Paukenmesse) and Theresienmesse in joint concerts with the Leeds Haydn Players and the Clothworkers Consort of Leeds and in March 2019 he conducted Philip Wilby’s completion of Mozart’s Mass in C minor at the University of Leeds School of Music. Christopher has conducted two musicals at the Alhambra Theatre in Bradford: Made in Dagenham in February 2019 and Hello Dolly in February 2018.

When not conducting, Christopher can regularly be found in pit orchestras playing trumpet or piano, or accompanying rehearsals for various groups around Leeds and West Yorkshire. He has also been a member of the Clothworkers Consort of Leeds chamber choir since he began his music degree at the University of Leeds in 2009 with whom he has sung in cathedrals and concert venues across the UK and in Europe. Since 2015 Christopher has been the Concert Series Administrator at the University of Leeds.

Christopher became the conductor of the Leeds Haydn Players in 2013 and has seen the orchestra go from strength to strength since then.